There are several different meanings of the raven that can be applied to the tattoo. Raven tattoos can have both positive and negative meanings. This bird has been a longtime symbol of negativity, death and mystery. Some people think of death when they think about the raven. This is because of the negative symbolism that has been linked to the raven over the years. These same meanings can be related to the raven tattoo. Despite all the negative symbolism, the raven can also represent some of the best attributes one could have. It is a symbol of intelligence and wisdom. The raven is very intelligent and has the ability to speak. 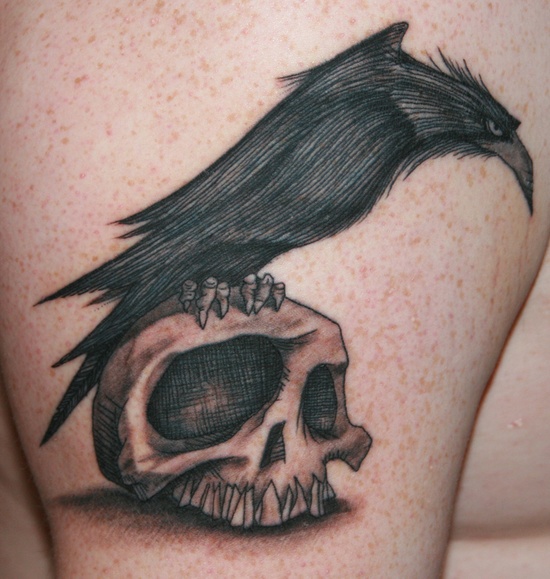 Your tattoos symbolize what you want them to. Nobody can tell you different. Raven tattoos can mean: death, war, pain, misery, magic and secrets. But also protection, future, light, inner self, prophecy, memory, intelligence or wisdom. Raven tattoo designs can come in several different variations and styles, such as a watercolor or fine line tattoo design. The raven can be portrayed with a variety of symbols that represent death, such as the skull. It is not uncommon to see raven tattoo designs with blood.

If you’ve decided to get a raven tattoo and want it to be unique, artists at Tattoo Stylist can make a custom design for you. Just send them your idea.