Halloween will soon be upon us, which means people are starting to break out the decorations: scarecrows, hay bales, and skulls.
But did you know skulls also serve as a motif in fine art?
In fact, artistic renderings of skulls span centuries and carry behind them a variety of meanings and expressions. For some, skulls tell the story of death and decay. Others glorify skulls as a symbol of beauty.
Keep on reading to learn more about skull motifs in art.

In the Beginning
Skulls have featured in art for millennia, although the reason behind displaying them has not always been clear.  In 7200 B.C., for example, families in the Middle East would decorate their homes with skulls. Since this predates both writing and the belief systems now associated with the Middle East, experts have not been able to figure out the meaning behind it.

Skulls and Death
By the time of the early Christians, artists were beginning to render skulls in association with death.
People included skulls in paintings as premonitions of death and terror. During the Middle Ages, people used them in funerals as a way to remember the dead.
Later on, people began using skulls to offer bleak commentary on human existence. Dutch painters in the 1500s, for example, often included skulls as a way to comment on the vanity of human existence.

Skulls and Life
Of course, skulls seem almost a natural component of death today. Because we only see human skulls after a body has decayed, we forget that they are a natural part of life as well.
Perhaps the most vivid reminder of this is the crypt of the Santa Maria della Concezione dei Cappuccini. Located in Rome near the Via Veneto, this is not just a tomb. Instead, it’s a room decorated with thousands of human remains. Skulls and femurs line the walls in intricate patterns reminiscent of a church cathedral. Some skeletons stand upright, robed in the religious dress of the Franciscan monks. 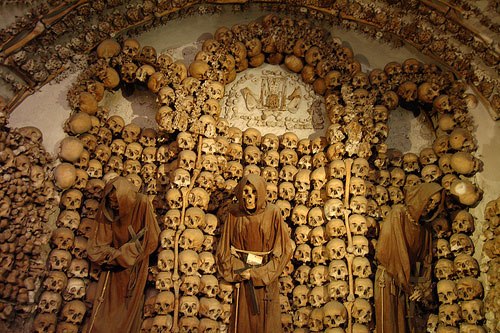 The artistic renderings were originally a practical endeavor. The church had run out of room for all the dead bodies, so it decided to decorate the walls. It became a stirring tribute to life. An inscription on the floor seals the message. It reads: “What You Are, We Once Were, What We Are, You Will Be.”

Skulls in Modern Fine Art
Skulls now exist in a variety of art mediums, from painting to sculpting to mosaic renditions.
The connection between skulls and life and death seems to flow on a continuum, even into the modern age.
In Mexico, people celebrate Dia De Los Muertos, the Day of the Dead, by displaying colorful skulls. The holiday honors the lives of the people who have gone before us in a colorful celebration. 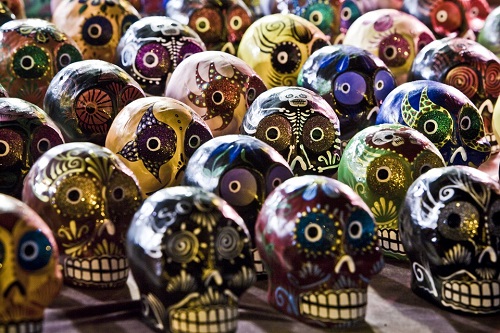 Break Out the Skulls
Skulls have a long and storied background in fine art.
At turns portraying life and death, they stand as musings on the cycle of human existence.
They also give us space to reflect on that cycle and how we understand ourselves within it.
Ready to incorporate more skull motifs into your life? Check out the rest of this website to learn how!

Why Do Students Wear Skull Jewelry and Clothes at College?