The most recognizable and popular trademark of Halloween is the orange pumpkin which we so excitedly carve. Though in the early years of celebrating this holiday, pumpkins used to have scary faces etched into their shell and then emptied of their insides and slowly cooked with the use of a small candle, today’s jack-o-lanterns, though based on the same principals, show no loss of imagination in designs.

Check out this awesome Skull Jack-O-Lantern! Noah Scalin at Skull-a-Day carved a pumpkin and found the skull inside! This is a really cool design. He cut the larger pumpkin entirely in half and then carved it and used picture framing wire to hinge it through holes at the back. Then he put the smaller pumpkin inside whole. The trickiest part is judging how big the interior space will be, but the bonus is that if it’s slightly too small you can carve out some of the inside to fit the interior pumpkin better. 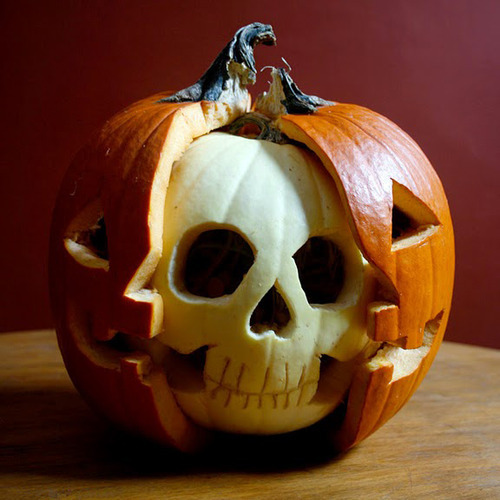 In recent year pumpkin carvings have become more and more popular. Sections of the pumpkin are cut out to make holes, often depicting a face, which may be either cheerful, scary, or comical. More complex carvings are becoming more commonly seen. Popular figures, symbols, and logos are some that can now be seen used on pumpkins.