Though Mexico City is known for its size, a growing local creative class and influx of world travelers are carving out first-rate gathering spots in its nooks and crannies. Jules Basement, a speakeasy tucked under an unassuming taco restaurant in the high-end Polanco neighborhood, feels like an appropriate place for these conversations. Mexican designers, artists, and foodies are turning traditional creations, such as mezcal, into world class products. Increasingly, the world is not just listening to Mexico, but talking back.

To get to Jules Basement, knowing which restaurant to enter is only the beginning. Next, visitors need to get through the doorman outside, who upon checking the list will let approved visitors through an industrial cooler door and a set of rubber curtains—a process Gerardo Salgado, co-owner with Olivia Villanti and Guillaume Guevara, admits pokes a little fun at the red velvet ropes and valet-parked BMWs more common to the area. It also taps into why Mexico City is so exhilirating, by confirming the feeling that something amazing is right under your nose. 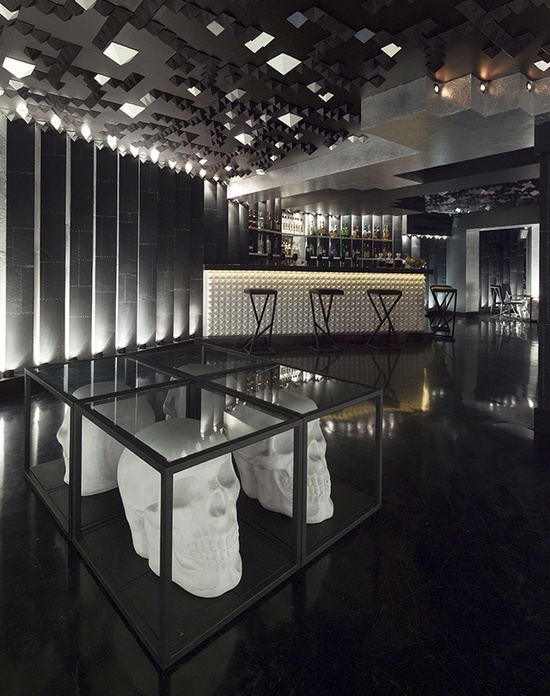 At the bottom of the stairs, visitors are welcomed into the catacomb-like space by large white skulls encased in glass. These are cocktail tables, custom-designed along with the rest of the space by French interior designer Emmanuel Picault and French architect Ludwig Godefroy, both long-time Mexico City residents. On the ceiling dozens of tiny pyramids mounted like stalagtites reference the spikes on the Mayan tree of life and emphasize the feeling of being underground. “It’s death overlooking life,” says Salgado, explaining that while the skulls shock tourists, they are nothing to Mexicans.

Salgado points out the repeating stair theme, which integrates the spacial restrictions of the basement by cutting jagged sections across the low ceiling. Every inch of wall is covered in hand-nailed black leather panels, including an accordian-style back wall which alternates between white and black leather. The bar itself is a white column of pyramids, glittering with cut crystal bottles of dark infusions. 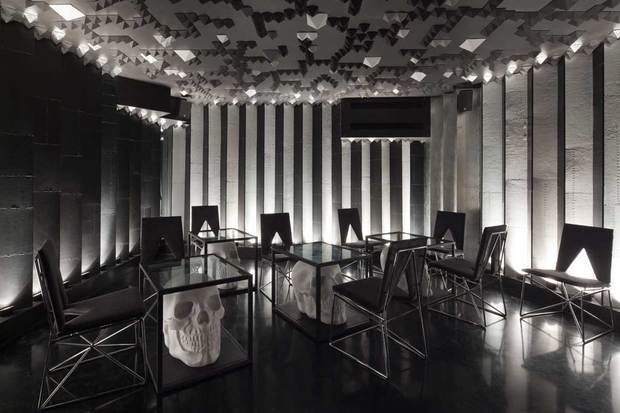