Felina De Los Muertos made by Megan Majewski  is a print from her original acrylic painting.
Megan’s cute’n’creepy art, shows a world of twisted bizarre dead girls, forgotten pets and other sweet but formerly living things.  Although non-living, you can feel the spidery souls of the characters lives and the hardships they endure as skinny-necked oddball creatures from a gloomy underworld of the dead.  With subjects that can be placed in the realm of Victor Van Dort and Beatleguese, they poses a certain cute and cuddly quality that makes you want to pinch their decaying discolored cheeks. 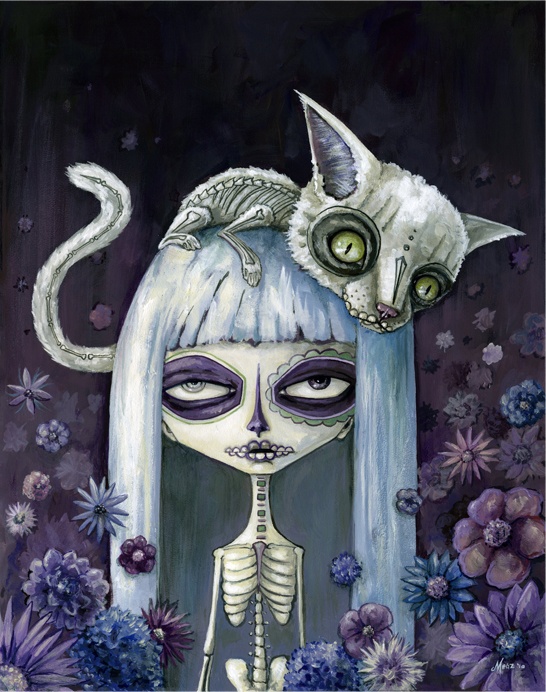 Megz got her start painting murals in her home town of Cranbrook and soon after moved to Vancouver to attend Vancouver Film School to start a successful career as a Computer Graphics Animator.  “Spook” Majewski’s student film has gone to many festivals including Annecy and was even used as the music video for Tunng’s song ‘Fair Doreen’.  She has worked in all areas of CG from films like IRobot, to television series such as Battlestar Galactica, to cartoons like Viva Pinata.
As much as she enjoys bringing life to characters on screen her true passion is painting those that do not possess life.  Her first solo art show was an incredible accomplishment for herself when she successfully created 100 paintings in 100 days.  The positive response to her art, and selling 82 of the 100 paintings on opening night has inspired her to keep painting more ghoulish vixens and zombie-eyed sweethearts for little girls out there whose dolly’s only have one eye.
A lot of her amazing artworks you can buy on Etsy (etsy.com/shop/deadkittie)