“The Ghost Writer” is an extraordinarily precise and well-made political thriller directed  by Roman Polanski — the best thing he has done since the seventies, when he brought out the incomparable “Chinatown” and the very fine “Tess”. “The Ghost Writer” offers not the blood and terror of Polanski’s early work but the steady pleasures of high intelligence and unmatchable craftsmanship — bristling, hyper-articulate dialogue and a stunning over-all design that has been color-coordinated to the point of aesthetic mania. Polanski fed the political material – troubling stuff about rendition and C.I.A. collaboration – into the mazy convolutions of a neo-Hitchcock story. He presents the entire movie from the restricted point of view of a likable young man, a hard-drinking, cash-poor writer (Ewan McGregor), who has been hired to finish the memoirs of Adam Lang (Pierce Brosnan), a former Prime Minister clearly modeled on Blair. The writer, who is known in the credits as “the Ghost” is not the first to work at this job. The previous ghostwriter has been found dead on a beach near the house of Lang’s publisher. The Ghost is in trouble from the beginning, and he knows it, but he needs money and self-respect, and he forges on. “The Ghost Writer” poster was created by Hubert Tereszkiewicz,  graphic arts student from Poland. 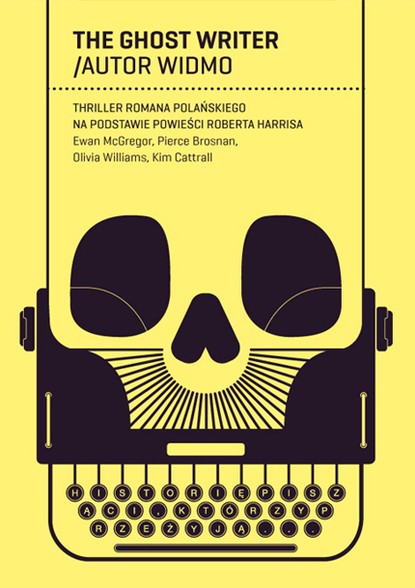