Skull and rose tattoo. Skulls usually mean the celebration of death and mortality. But over the years, it’s now being tattooed as a celebration of a life that went away. There used to be a time that skulls have to be drawn in black for that grave, gloomy effect. But there’s a trend nowadays of colorful skulls being inked. The reasoning behind adding color and joy to a skull portrait is often attributed to celebrating how a deceased special someone brought color to the life of the one being tattooed. 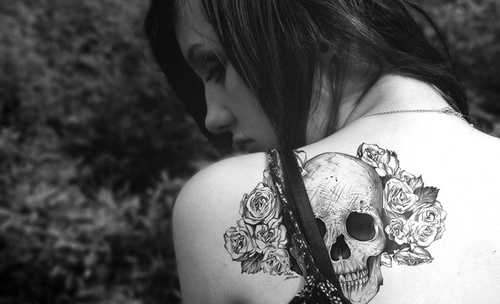 Skull tattoos, can mean recognition of death, celebration of life, and just about everything in between. As such, it’s not uncommon nowadays to have fully customized inked versions of the skull at particular parts of the body. Some may view it as strictly for show. But often there’s a reason why people have it inked that way. Just like any other tattoo, what it really means sometimes can only be answered by the person who got it done.