This time we want to show you an awesome roses and skull tattoo by Yliana Paolini. Skull tattoos are very versatile tattoo designs, and a popular skull tattoo design incorporates both skulls and roses. Tattoos that include both a skull and a rose often denote the contrast of life and death, or beauty and decay. A symbol of duality, the skull and rose tattoo is a reminder to the wearer of the contrast of good and evil and the balance of such philosophies in life. People with roses and skull tattoos have their own reasons and subsequently own meanings for their tattoos. 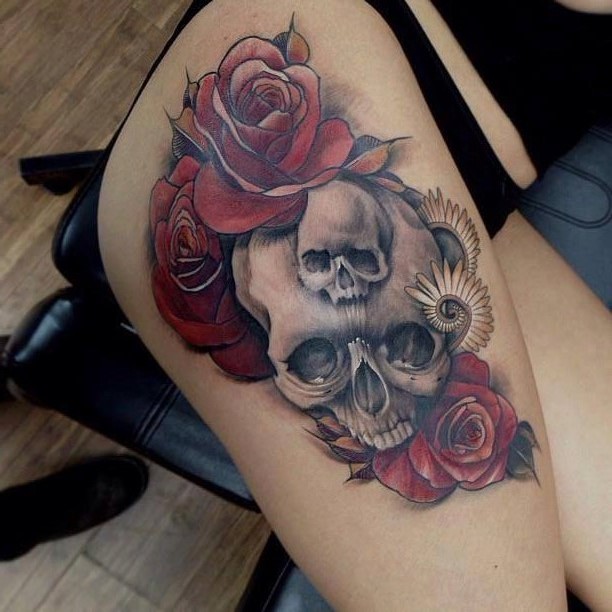 Yliana Paolini is a very talented artist and her tattoo works can be very different, from flowers to comics. She has a big range to offer, but this artist certainly has a favorite style among her own designs – cartoonish realism, with color or black and white; those that came out of the skin and play between the reality and the fantasy.

Yliana Paolini has managed herself to gain an important place in the tattoo industry in Venezuela, but she also has decided to conquer Europe, where her name is nowadays more and more recognized. She works in Brighton, United Kingdom.

‘Hard work and discipline are the key elements to be successful in this profession. You are your own boss. The freedom that this work offers to me is one of the best things. You make the decisions of what you want to do, and then see your idea on someone else skin is something amazing. It is a life mark.’