Tattoos and tattoo related imagery have seen a huge rise in popularity over the past few years. Over the course of history, one of the enduring tattoo designs is the skull. Skulls can mean different things to different people. While some may associate skull with death itself, others associate it with both danger and defiance. Skull tattoos can mean recognition of death, celebration of life, and just about everything in between.

We love this awesome dinosaur skeleton tattoo! T-Rex was definitely the baddest and one of the largest of the known carnivorous dinosaurs. It’s full name “Tyrannosaurus Rex”  literally means “king of the tyrant lizards”. Despite its tiny and seemingly worthless arms, the T-Rex was a pretty serious predator – able to run at speeds of up to 15 mph when pursuing prey, even though it weighed between five and seven tons. Check out this tattoo and you’ll see the T-Rex’s notoriously vicious jaws and skull, which the dinosaur used to crush bones and bore into its kill. The Tyrannosaurus Rex was a pretty bad-ass dinosaur!

We have found this awesome picture at tattoomagz.com. You can find there many coolest photos of beautiful tattoo designs and jaw-dropping custom ink-works (from the simplest single-tone tattoos, classic pin-up tattoo designs, to the stunning complex 3-Dimension look tattoo works). This website is worth checking out! 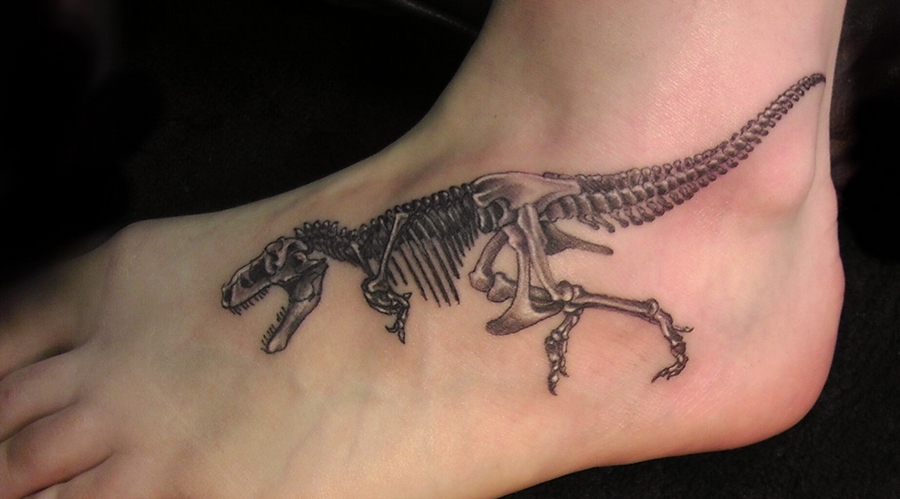